When I was very young, I remember, we vacationed at a lake. There was a wharf that went out into the lake. There was a deep side, which was way over my head, and a shallow side to the wharf. I was supposed to stay on the shallow side, as I was a very weak swimmer. My sister, who was a good swimmer and older, could swim on the deep side. I had a mask I could wear to see underwater. I looked down into the water to the shallow depths below. I liked the way the light rippled and moved, and how the rocks and shapes I saw seemed animated by the waves of current. The deeper the water was, the greater was the enlivening of what I saw. I felt envious of my sister, who could swim on the deep side, where I knew this effect would be much more pronounced.

One morning, our parents were occupied up in the cabin. My sister and I were in the water for a swim. I swam underwater with my mask on, holding my breath and immersing myself in this world of shimmering light and pulsing objects. After a time, my sister had enough and went inside, leaving me alone. I slowly made my way through the water to the deep side of the wharf, looking down through my mask the whole time, being led on by the increasing distortions and bending of the light which I was so attracted to. And what a different world the deeper depths were! Plant leaves waved to-and-fro from their anchors in the lakebed as the sand and mud swirled in current, giving the impression that every part of this environment was alive, while illuminated from above in dancing shards of sunlight.

Entranced, I had forgotten how far out and deep in the water I was until I realized the ends of my feet were nowhere near the bottom. I struggled to get my head above water for air, and I panicked. The more I splashed to try to and stay above, the more I sank underneath. It wasn’t long before I had exhausted myself. At that point, I felt a calm come over me. There was nothing more I could do. The scene through my mask became inviting, and everything I saw came to life and embraced me and began to blend me into itself. I let out my last breath of air and breathed the water in.

I remembered, as I always will, that last moment of surrender and embrace before rescue.

I had made my way into another world, only to be sucked away at the second of transition. After that, my native world was never the same. It seemed that any aspect of existence I knew through my senses was capable of being a passageway to something moreover hidden from me. It was enticing, but it also made be cautious, of light, of things that moved and things that were still, and the seeming invisibility of the air itself.

Some have suggested that our senses of touch, smell, hearing, and sight are as much barriers as they are windows to perception. They keep us from an overwhelming reality and limit our awareness to the practical necessities for survival. Disruption of any of the senses can throw the whole into a panic of new cognitions, until our instincts can adjust us again to the more mundane requirements of daily living. And, we are normalized once again. At the top of the hierarchy of the machines of our awareness are our eyes. Sight is the penultimate above the rest. Any changes in it are immediately noticed, and potentially profoundly influential. It is the great locater, measurer, and bridge between any number of realms. 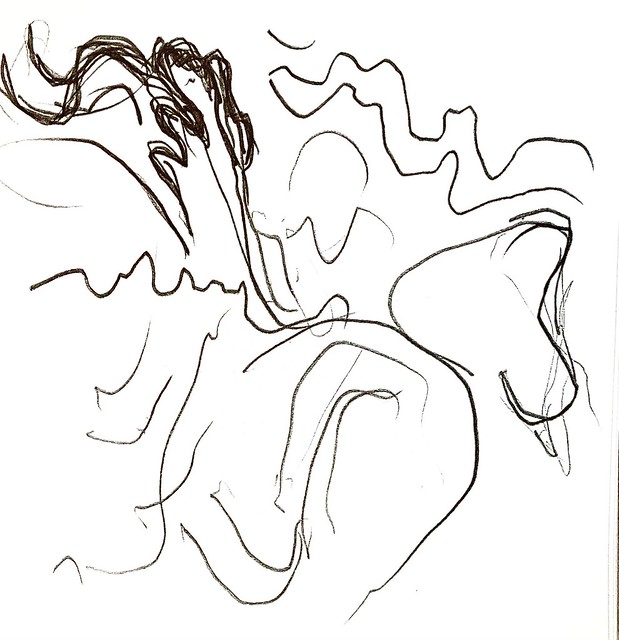 I was driving a scooter to or from work when I first noticed it. It looked like a drop of water on glass or a windshield, except that it was on, or in, my eye, my left eye. I could see through it and around it, as it didn’t yet fill my eye. Through it, the scene before looked bent and deformed, and seemed to move and change shape. The edge of the drop was dark, almost black, and surrounding was another edge of rainbow-like light. When I moved my eye to look at it straight on, it seemed to evade my glance. I drove on, I recall, and at red lights, I toyed with it like in a game of cat and mouse, looking toward it and watching it dart away to my peripheral vision.

I lived with this mote for some time and it became a kind of familiar, always there, a novelty of my vision, to be played with like a little kaleidoscope I could occupy myself with when no one else knew. Then one morning I woke up and it had advanced to fill my entire left eye. Was I dreaming? I closed my good eye and made my way into the next room. The lines of the doors and walls bent in space. As I moved, they buckled and rippled like waves. The air was a cluster of speckles, and it reminded me of sand and mud caught in the current of the waters of that lake long ago. The sunlight from the window had a puffy or bloated quality like that of an overstuffed white pillow, and objects in the room were neither close nor far away, and what lines I could see did not define shapes. Distance seemed a neutral and middling thing. I stayed in this state for an hour or so with my good eye closed and seeing through my distorting left. This time I surrendered to it, and no one saw to pull me out.

I remember the fascination of reaching my hand out toward the window’s light and seeing the fingers of my hand be squeezed to the thickness of chopsticks, then moving them, seeing the air rush into them and swell them up fat like balloons. In one direction, their tips grew wide and narrowed to the knuckles, inhuman fleshy triangles, and moved otherwise, they narrowed to their tips like so much wire. Then coiling. Then curving away from me. Then fusing into a spiral of radiating lines which must have been a table leg.

I imagined I was watched by the corners of the room. I saw the air invade my lungs through my mouth like it was something new. Because, I could see it. Where I tried to see where something must have ended, its edge defining line would race the other way. This was all within the space surrounding me in our familiar rooms. I closed my left eye and opened my right. The world returned.

I felt I should deal with this as a problem.

What I had was a completely detached retina. After one operation, it was worse. The eye had gotten infected from the operation. The second operation was done while I was awake, and included four shots into my eye to inject antibiotics. A third operation repeated the first. By the end of all the operations, the doctors were happy with the success. The retina was now completely reattached. The sight however remained distorted, and remains that way to this day. Though, the doctors remain pleased with their perfect operations. I endeavor to become used to the condition of my left eye. And, I have gone about exploring what world it uniquely offers me. This is a kind of point of departure.