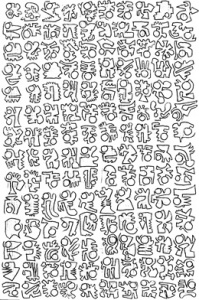 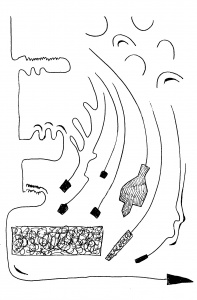 In a time of flood or collapse, it is natural for the living to seek what seems to be afloat or stable on its legs. These rafts or islands of refuge or refuse are embraced and grasped in the same tenacious way a declining terminal patient clings to their consciousness, doing whatever they can for one last moment, whether the method be to count numbers, recite a recipe in their mind, or swear at imagined foes.

Whatever the apt comparison, it is desperate, and it is useless. The contemporary art condition in my opinion has been in this state for the last twenty or more years. The rafts that look so life preserving in this case are trends of the unfamiliar, (foreign), products of isolated individuals, (unearthed from sheds and dim lit rooms, exposed to light briefly and abandoned to return to their secret gardens of mental illness), and students who have recently entered the market, with a plan to rehash the pluckings of their art history classes in an effort to revisit a past movement with the prefix of “neo.”

Amid this riotous and futile clamor is a strain of intention, not unlike the spirits that accompany our daily lives, to manifest on celebratory days in costume and pantomime, and speak to us in whispers that “time is nothing, and matter is fleeting.” To this end, outside of art trends and media frenzy, are the nonexistent artists, and the shifting, transient walls of the ghost galleries. While as ghost ships, they may drift from place to place, and on a schedule unrelated to a clock or calendar, there are signs that they will soon appear; a smell of varnish, mixed with dust, a creak of a timeless kinetic construction, and a hollow echo of an opening reception.

Reviewing work presented at such venues is necessarily unspecific, in that there are no set addresses, times, or reliable artist stables. I can tell you what I experience, without expectation that you will ever see or know the work or artist, as I can direct you to nowhere. Only will I say, be aware, look for signs in your senses. This is the lasting, important work.

I should add, ghost galleries are not always like a suddenly appearing ship on the sea, which arrives unexpectedly, fully rigged, out of a thick fog, with a crew of skeletal pirates ready to jump your ship. A ghost gallery can come, in little pieces, at different times, and it is up to you to recognize these parts, and to piece them together to compose the whole. And, you must be like me, with an instinct to know they exist, for them to present themselves to you. Being an audience member then, is a very tall order.

Listening to recordings of music one afternoon, I was particularly struck by a jazz improvisation that ended up in my queue. I had heard it before, but perhaps not appreciated it in the way I did now. I thumbed through the notes and found it was Ornette Coleman’s “The Shape of Jazz to Come.” While this satisfied my need to know, my eyes and mind still lingered on the name “Ornette” but without the “e” at the end. A short time later, I was reading an email from an old friend with the first name of “Kelly.” As I began to answer it, I found I had written her name as “Kally.”

This deviation too stuck with me, until the two magically merged during an unfocused moment as the name “Kally Ornett.” Having the strong feeling it was significant in some way, I wrote it down on a piece of paper. Driving to my teaching post that same night, I had my headlight suddenly go out. I flipped the headlight switch on and off a few times, and it began to flicker irregularly. In a corresponding flash, I saw the name “Kally Ornett” before my mind’s eye. In an equal space of time, the act of flipping this switch set a milky white lever in motion beside me, causing another adjacent to it to respond by churning a transparent piston, and then another, through a network of channels.

The street I was on had disappeared, as had the buildings and markets I was passing, and my scooter was no longer beneath me. As with things out of my control, rather than fight against it, I accepted this as an unavoidable aberration of my reality, entirely and without hesitation. Having accomplished this adjustment, I was immediately rewarded with the emergence, as lava would flow from a volcano, of a magnificent foyer of many royal shades of projecting light, which landed together to form the walls, floor, and ceiling of an elegant entrance to a modern gallery, reminiscent of one where I had exhibited in NY years before. In this radiant lobby, in neon-like blue letters, hovered the name “Kally Ornett.”

Without moving I seemed to have been conveyed into a high wide interior. There was no appearance of a conventional gallery. The walls undulated and changed in a casual way as if to indicate they were for no purpose other than to distinguish a compartment. Nothing was hung or displayed, yet there was a feeling of fullness in the air surrounding me.  Again, there was a materialization of long levers, pumps, channels and rolling gears, coming into existence as if from a mist, nearing solidity, and giving way to another perspective, or a new and rivaling view. The purpose of this manifestation was unclear, but as before, it heralded a shift. I felt redirected to the name I had been shown.

So was this the work of Kally Ornett? At first connected to the existence of a gallery as it spontaneously rose around me, and now, to something else, perhaps the fabrication of the name, a name that had come from two misreadings, and the convergence of a faulty headlight, the symbolism of fabrication and manufacture is present in the pump, gear, vent, and lever in a way not in electronic circuits. It is akin to magic, as the object is acting on its own as under a spell, or so it seems to the impressionable mind. I let my thoughts wander, as a kind of test. I found many things suddenly came from the mysterious air, the product of what the mechanistic clue had indicated to me.

In summary, this took the form of mountainous glazed cakes and similar sumptuous indulgence, and a dwelling on the curious (flights through geography and topology). I felt fine fears, heightened to a razor’s edge of subtle influences on rarely touched nerves, I felt the turning of a gear and suddenly I was an eel on a sand beach, flopping back and forth with hundreds of others, trying to get back into the sea. It seemed an evening spent, but at its end, I was looking down at my watch, and no time had passed. I was sitting on my scooter at a light, and the headlight was steadily on.

It is hard to characterize anything more deeply of this experience. If someone were to ask me, then, how is the work of Kally Ornett, I would have to say, it is future reaching, if I were not in the mood to speculate further, which I mostly am not. If you are left cold by contemporary art, you may want to consider being a little more sensitive to the details and accidents of your life, as the awareness of them is the gateway to the backstage, the invisible mechanism by which the fabrication of the ghost gallery and its pantheon of artists, (who are after all some small deposits of imperfection on the course of your day,) hinges.