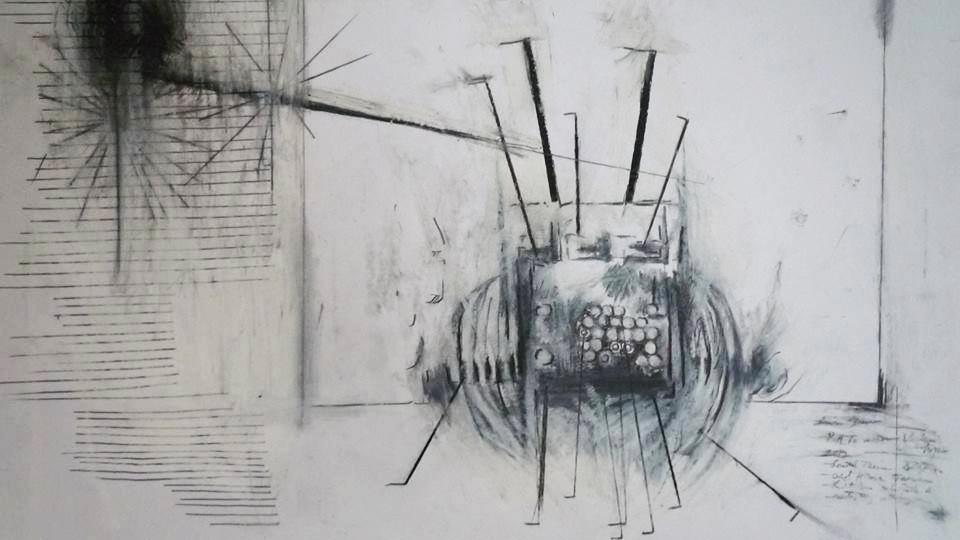 I could take a picture from my desk, pop the image out and place the frame around my thumb, or ring it around my neck, and wear it through the day, and therein capture each expression, and every word I say, and call it some production of the artist’s craft. Having not done that, maybe I will this afternoon, and see how it goes. Or maybe just consider one whose work has touched more deeply any such related theme or introspection I’ve proposed. Unselfconsciously and in a way of singular autobiography, one artist seems clear and apart in the implication and the talent of “framing.”

More generally considered the master of more accurately “the limiting and the bounding of a section,” Gee Burru anointed every fountain and well of his life with the presence of a closely following and calculated “other,” a fabrication of mind that was in fact his projected self yet not the pilot of his vehicle, or the arbiter of his will. It was rather a flaccid observer with a single armature, capable of a single focused thing at a time while his namesake proper, Gee Burru, continued with his daily routines and responses. This second other was most capable in the realm of pinpointing the angles of the hypothetical “frame” of the simply termed act of “framing,” with manifest expression as far out of the geometrical shape of routine and monotony as one could imagine; it was, in this sense, Gee Burru’s negative.

Who knows how any soul’s potential other impacts the secondary world which it implies, with its full force of primary acts and necessities. For instance, is the other’s body manifest physically, does it maintain its own quarters, marry, have vocation, and reproduce distinctly on its own?

In particular, we have the evidence of a handful of progressions. The first, and we can call this the introductory work, is what has been referred to as the “Band-aid Stack.” There is not a lot of information about Gee Burru’s childhood, but it is known from public record that he was born in Longfang, which is now known as Highfang, in the Cribcorner District, in the year 1810AF, with alternate birthdates of AF70 and AF9, accounting for doubling of some aspect of himself dating back to his birth. In addition to this remarkable fact is the antiquity of his arrival; indeed, there is no record of his passage back, which indicates, as all records are accurately kept in this regard in the continental region, that he continues to exist, and at an equally amazing age of 1079AFB, which makes him almost immortal. We know that the first application of band-aids to his left forearm were carried out by another hand, as each one is dated, and signed, with the signature of a barkeep famous for her delinquent debts on Ohoh road.

You have to remember, this was before there was a standard, and as yet, in these more historical times, the artistry of wound support was not yet established. In the first days of the art, it was improvisational, and without a fixed vocabulary. And, there was little prospect for a practitioner. There were no dedicated museums, mentor systems, or universities for the field. There was no compulsion to preserve. It was only through transcendent confidence that a future was imagined which might embrace, and not destroy, such an artifact, that it survived.

One band-aid was placed on top of another, in the hint of a permanent and continuous progression, and with no understanding that the previous one should be removed, and not accumulated, but replaced. In that respect, there is an element of the “alien to experience” that characterizes the act. Another aspect is the tacit bourgeoisie fact of cultivating the accumulating stack of band-aids, which could be an alternative interpretation of the very factor of accumulation. In this case, it would be considered crucially significant that the stack would require Gee Burru be largely stationary in his life, as is required by other similar status claims, such as excessive growth of fingernails and toenails to show the lack of the necessity to engage in work. We should also consider the aspect of continuity with setting. “Band-aid” is a registered trademark of the Johnson and Johnson company, that in our time system was established in around -001AF, and collapsed with all independent ventures on that continent in the year 66 ABF. This obviously impacts availability of the authentic item outside of Gee Burru’s time frame, as well as these years also existing parallel to our physics, which is widely known and discussed, and as such, there is little likelihood authentic items for parallel A physics were or will ever be available to us here (in parallel B). So, we are left to doubt the functionality of the bandaging in the pre- artistry wound support period. The band-aids were then replicas, fabricated assuredly at some expense, and, pure aesthetic-as-quotation.

The height of the stack is what strikes this viewer most immediately. The layers have been examined and cataloged in a painstaking process of careful peeling back, restoring to exactly the previous arrangement, and the trussing, harnessing, and scaffolding of the entire stack to avoid a larger, irreparable tipping or tilting. Kudos to the curatorial and assessment team that dealt with the archival process. There are all told six hundred and seventy thousand band-aids in a single vertical stack which passes through the restoration lab ceiling and out into the sky above, protected there by a thick glass bubble that maintains a steady temperature and humidity. The examination continues, and thus far, three hundred signatures have been cataloged from the various levels of the band-aid stack, though they have not been historically researched as yet, which will likely necessitate extensive bibliography and annotation for this artifact, the work of which will be at least in part dependent on continued funding, always in question.

Retiring this theme for the present, we may consider the other significant quality of the Gee Burru legacy. That would be, the “other” of the so called doubling of a life, which I previously mentioned. The evidence that this dividing self exists is almost entirely in the context of interpretation, which after aesthetic standardization (that signaled the cultural establishment we know today) parses in only a few directions, and as critical thinkers, we have only a small amount of work required of us in determining which direction any given work may lay in. “Otherness,” regardless of whether historical or contemporary, is to the largest extent qualified locally by unexplained creative phenomenon corresponding in time to the presence of whatever subject is in question. In the immediate years after the three accepted and alternative birth dates of Gee Burru, an improvisational music commonly performed in small music training booths where you would find pigeon roost today became subject to an infection-like variation. Musicians, performing on as tradition demanded, an instrument of their own fabrication, yet all became infected with a similar urge, to created passages of “ghost” notes, which were not actually played, but rather implied, because they were suggested by spaces and harmonic sense between clearly denoted pitches. Thus, improvisation also contained “ghost” music, implied, but silent, or “other” spontaneous composition, existing from seeming hesitation, or the attempt at more expressive styles, or imperfect technique. Currently, there are close to eighty transcription of the “ghost” or “other” composition. Some implications of these absences are not in the range of musical pitches, determination made by the standardized interpretations, so, the transcriptions are often in the graphic realm. These images may be seen, along with replicas of the band-aid stack (the “original” replica as I have indicated is being delicately studied in laboratory conditions) at the central museum of the Cribcorner District, which maintains a permanent and developing collection and research archive of all material relating to Gee Burru.

Before these terms became common, principles of framing must have been understood as mental aberration or witchcraft, and sufferers from art’s demands would need to be careful at every turn. Burru was obviously protected in his life, both by others and himself, from costing him his life for his futurism. It says something that he has yet to come forward. Perhaps, it is habit that keeps him from showing himself today, the oldest of our species, and arguably the most profound. I am supposing it is possible he holds greater secrets, still outside of our contemporary appreciation, and this is what keeps him ever cautious, outside, and other.